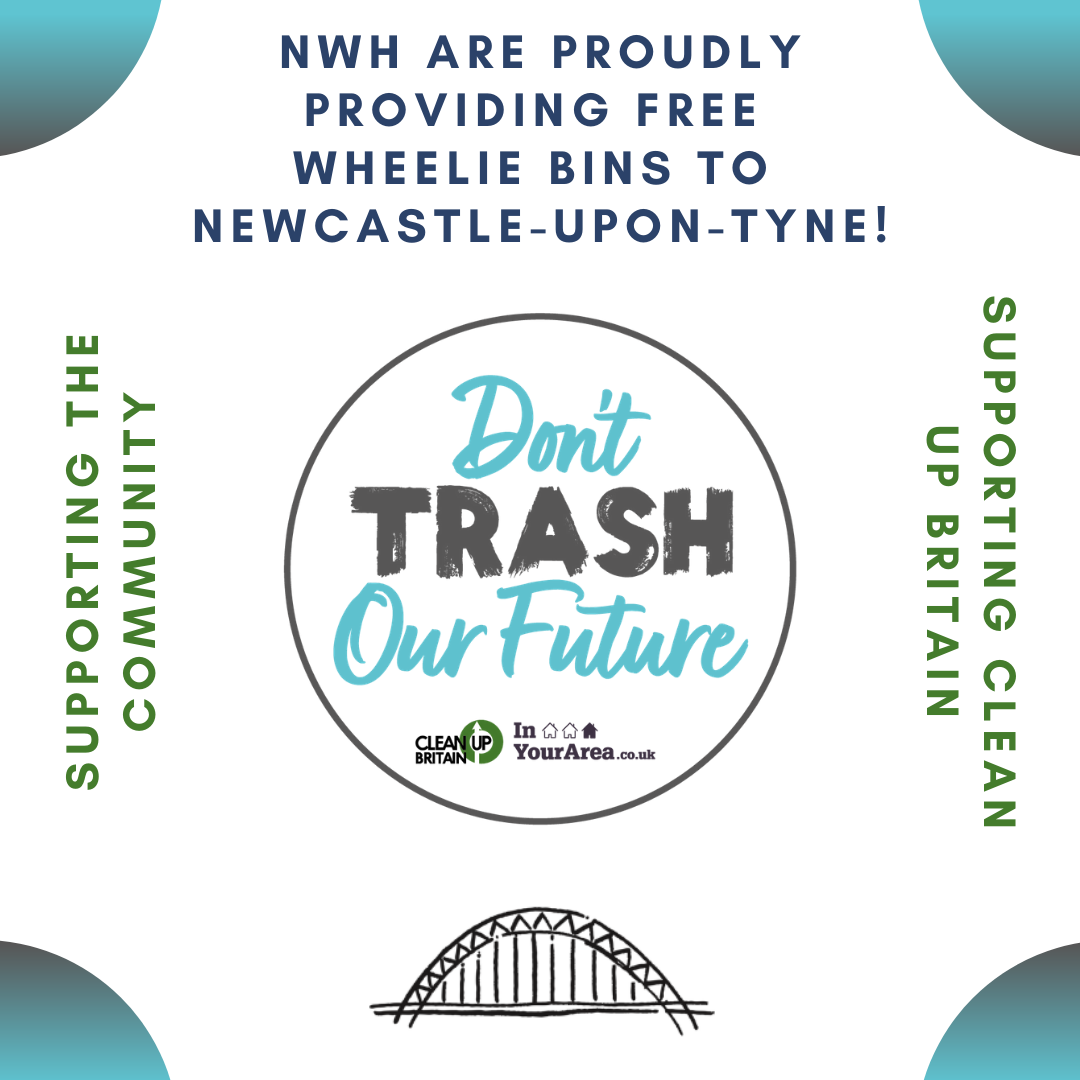 We are proud to announce that we’re teaming up with the fantastic Clean Up Britain team and their Don’t Trash Our Future campaign.

The aim of the campaign is to deliver behavioural change around littering and fly-tipping in the UK, by highlighting key issues and encouraging the government to enforce stricter fines and community service for offenders.

Fly-tipping and littering is a huge issue, not only for the obvious hygiene implications and unsightly nature of rubbish piling up in the streets, but also due to the various environmental factors that may have potentially devastating effects on future generations.

And while there are thousands of devoted volunteers and good-hearted folk out there who litter-pick on their own accord, it’s simply not enough to stop the littering epidemic that is sweeping the nation, so changes must be made.

NWH Group will be providing 1100L fully branded, Don’t Trash Our Future wheelie bins, free of charge, to areas in Newcastle that have been identified as problem spots for fly-tipping.

This is to combat escalating waste pile-ups and encourage litterbugs to bin their rubbish in an area that has been adversely impacted by fly-tipping and littering in recent months.

As part of our partnership, not only will we provide the wheelie bins, but we will also have our teams emptying the bins on a weekly basis, again, free of charge.

We are committed to creating a positive change towards negative behaviours such as those highlighted in the campaign, so we are incredibly proud to get behind this initiative and encourage a shift of attitude, particularly in the North East of England.

The Don’t Trash Our Future branded wheelie bins will be delivered to prime fly-tipping sites in Newcastle on the 31st August.

You can also join in by signing the online petition, joining the Clean Up Britain Supporter Group they are also accepting donations made online to help fund the initiative.

The NWH Group is a second-generation family business headquartered in Midlothian. Serving the whole of Scotland and Newcastle from ten sites, the NWH Group’s vision is to eliminate waste by transforming it into a valuable product. The business currently employs around 300 staff.

On its mission to eliminate waste, it provides waste collection services to the leisure, retail and construction industries. Collecting waste with its fleet of trade refuse, skip, tipper, grab and walking floor articulated vehicles, transporting materials to its recycling facilities where they are transformed into high value products such as cardboard, paper, washed sands, biomass for energy and animal bedding.