After 50+ years of services, David Williams, expresses how his love for lorries remains 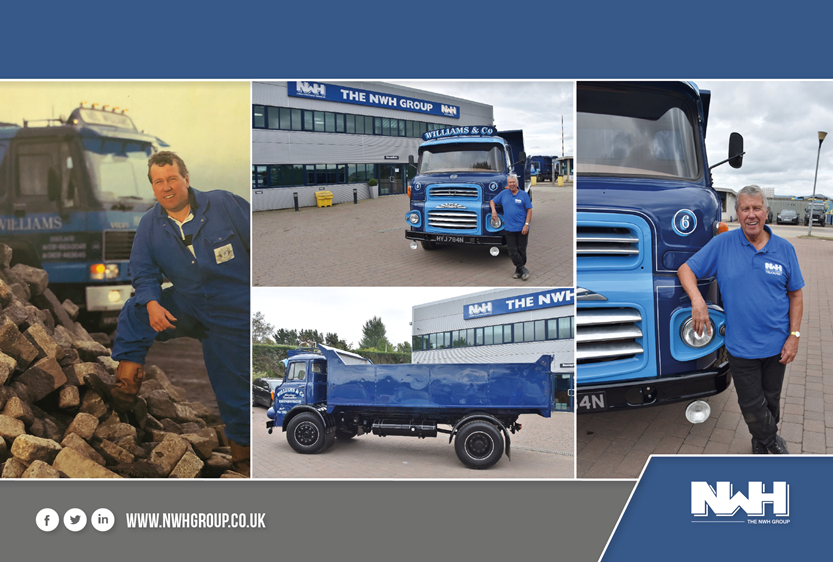 Reduce, reuse and recycle is the name of the game” but after 50+ years of services, David Williams, one of the founders of the NWH Group expresses how his love for lorries remains, how he got into the trade before founding the NWH Group.

Albion lorries are big favourites with Scottish enthusiasts, and are always in great demand. Bob Weir went to Dalkeith near Edinburgh to meet David Williams, one of the founders of the NWH Group.

David has lived in Scotland for many years, and comes from a haulage background.

“I was actually born in Liverpool, and lived in Runcorn for many years,” he recalls. “My father was originally involved in agriculture, before moving into haulage. In the 1960s the government offered subsidies for using lime in the fields to get rid of harmful acids. Like a lot of contractors at the time, my father had an old ex-army truck to haul the lime. He then bought an ex-brewery Leyland Comet. By this time he had found a job in Scotland, and used to work away for weeks at a time. The rest of the family moved up to Edinburgh in 1961. Once I left school I worked at a couple of jobs, before I also got into transport. My father got me another old Comet and I started helping him haul the lime. I then bought a Bedford TK, which was a very popular lorry for local work.”

David remembers that during this period they were trading as DSW & Co.

“D S W stood for my father Derek Stanley Williams, and I was the Co,” he explained. “We started doing quarrying, and then some long distance work. We had a contract with Johnstone’s of Bathgate, to take their clay down to Morpeth. We then drove on to Birmingham in the West Midlands. Frank Carlisle in Congleton would often give us a return load to take to Alloa in Scotland, and we occasionally carried salt from Middlewich in Cheshire. By this stage, a lot of the driving was on the new M6 motorway.”

David also has fond memories of the A6 and Shap, dating from his teenage years.

“Before we moved up to Scotland my father had digs in Edinburgh, and we would visit him on our holidays,” he recalls. “This meant driving up the A6, and I still remember places like the Jungle café. Later on when I started hauling we were still using Shap, until the most northern section of the M6 opened in 1970. I’d already heard some of the tales, and you certainly had to keep your wits about you. I still remember the number of BRS lorries that seemed to get stuck in the snow. Apart from the safety issues, there were also the long queues, particularly on the steep sections. Some of the journeys seemed to take forever, especially in bad weather.”

David continued to work with his father until the mid-1980s, when they went their separate ways.

“My younger brother Neil was also in haulage, so we started to work together,” said David.“In the seventies we were using a lot of Bathgate built lorries like the six-wheeler Beaver, and Clydesdale. We were obviously aware of the European trucks that were coming onto the market, but were still keen to buy British where possible. We then moved on to ERF, and that took us into the 1980s. We finally switched to Volvo later in the decade, and never looked back.”

In the early 1990’s Dave and his brother Neil opened a new site on the Mayfield Industrial Estate near Dalkeith.

“Neil had been working near my father’s depot near Rosewell, not far from the Edinburgh city bypass.” David recalls. “By this stage, he had a small fleet of three or four lorries. Once I joined forces, we needed more space. A local coach company put the land up for sale, and we moved the short distance to Mayfield.

“Our fleet quickly grew to about a dozen vehicles. By this stage we were using a mixture of British and European lorries, some Volvos and a few ERFs. Looking back, it’s surprising how things have changed over the years. When I started in business the lorries were mostly four-wheeler types. Then they moved to six, and now it’s all eight. Ironically because the vehicles are more efficient, the running costs are about the same. NWH still own two old six wheelers, and they put in the occasional shift. But these types of lorries are really a thing of the past.”

David recalls that the brothers were still doing mainly long distance hauling, but they also started to expand into local jobs.

“We returned to quarry work,” he explained. “Although the deep coal pits had closed, there was still some open cast mining. By this stage my three sons Mark, Craig and Richard were coming into the business straight from school. In 2005 we moved into the company’s new premises on another part of the industrial estate, and they made an offer to buy me and my brother out. We were both thinking of retiring, so the move made sense.”

The NWH Group is now in its second generation of ownership, and David credits the company’s success to tried and tested family values.

“Fortunately we’ve got a wide range of skills, and a strong work ethic,” he explained. “My youngest son Mark is currently CEO, while my other son Craig runs the ground operations. We also have other members of the family on board, to drive the business forward. Our four core values are safety, compliance, customer service and teamwork.”

Although the company’s headquarters is at Mayfield, they have eight other operations in Scotland and more recently Newcastle.

“The company specialises in recycling, environmental services and waste management,”said David. “Recycling is now an imperative part of the environment, and NWH provides the proper receptacles for our client’s needs. As part of the service, we also arrange collection and delivery to one of our materials recycling facilities.

Recycling has come on leaps and bounds in recent years, and now includes items like glass, food, cardboard, wood, paper and general waste. “Reduce, re-use and recycle is the name of the game,” said David. “To manage things properly businesses need a well-thought out plan, followed by strong implementation.”

The product supply side of the business involves delivering our recycled aggregates which also are use to form and deliver or concrete using our fleet of volumetric mixers.

David explained thatNWH Groups Concrete is mixed on site for a cost effective and flexible solution for all our client’s concrete needs. This allows the grade, type and amount of concrete to be altered where required. We also have our own aggregate recycling facility, which is a big help. All materials are quality assured, and comply with Zero Waste Scotland’s highway specifications.”

With a fleet of over 150 vehicles including 6 and 8 wheeled tippers, grab lorries, low loaders, walking floor and ejector trailers, NWH Group  specialises in providing a complete recycling service to domestic, commercial and industrial customers nationally. Other projects include the company’s sweeper and gritting services.

“The winter can last a long time in Scotland, and our fleet of new road sweepers is a complimenting part of our services,” said David.“Formerly known as Citysweep and now part of the Group brand, our vehicles are the latest 650 models made by Johnston Sweepers. NWH Gritting Services also provides gritting and snow clearing services throughout Scotland. We service local businesses, retail parks, industrial estates and schools.”

Although David admits that the modern generation of commercial vehicles is a huge step up in power and performance, he still has fond memories of lorries like the Albion Clydesdale.

“Although the Albion is not my favourite lorry, it has a special place in my heart,” David explained. “I can still remember the day I took delivery of a new Clydesdale. The lorry cost £ 2942 from dealers Josie Wilkinson in March 1970. I had traded in a 1966 Bedford TK as part of the deal, and this was my first new lorry.”

The history of the 1976 registered Clydesdale is a bit of a grey area, but the lorry is believed to have been made in 1972, and was new to Tarmac Roadstone. The lorry is carrying a Dundee ‘YJ’ registration, and during this period would have been fitted out as a bulk tipper. HYJ 784N was then moved on to a farmer in Kent, who used the vehicle in his animal feed business. The lorry was then acquired by local enthusiast Brian McBride. He gave the lorry a full ‘bottom-up’ restoration, which included fitting a high speed differential to improve the Albion’s economy and cruising speed.

“I bought the lorry from Brian in 2017,” said Dave. “The only things I’ve changed are adding a sun visor and altering the paintwork to the family colours. This was carried out locally by specialist David Phillips in East Calder. The spraying was done in a sealed booth, to avoid dust and other imperfections. The sun visor took a surprisingly long time to track down. Then just like buses, two turned up in quick succession. I’ve already started taking the lorry to rallies, and it has been well received by other enthusiasts.”

Although David used to know every nut and bolt on a Clydesdale, he admits driving the lorry after all this time was a bit of a learning curve.

“In some ways it was just like yesterday, although I still had to watch the gear changes,” he recalls. “Brian only lives a short distance from the Mayfield Industrial Estate, and my first trip was driving the lorry out his yard. As I recall the Clydesdale could easily pull away in third, and much to my relief I managed to get a clean start without crunching the gears. I remember back in the days I used the Albion for work, that the gearbox needed a lot of respect. Fourth to fifth gear was slightly off centre, and overdrive was a doddle. Today’s generation of drivers might struggle with a constant mesh gearbox, but it was considered to be quite sophisticated in its day.”

When he was running the business, David never had much time to visit the vintage rally circuit. Now he is retired, he is looking forward to meeting some new friends.

“We usually go to Scottish Truckfest at the Royal Highland Show at Ingliston near Edinburgh, but that is more of a promotional event for the latest generation of lorries,” he said. “It will be nice to go to some of the vintage rallies, where you meet a different kind of enthusiast. They are more likely to be the same age, and will have similar memories. They can still recall the days when British commercial vehicles ruled the roost, before the European invasion in the 1970s.”

At the time of my visit David was preparing HYJ 784N for August’s annual Albion jamboree at Biggar in the Scottish borders.

“Apparently there are three of us making the trip down to Biggar,” David explained. “I’ll be driving the Clydesdale, and Brian and another mate Alistair Baxter will be bringing along their pair of AEC Mandators. We are all a similar age, and have good memories of these old lorries. We will probably cruise around 50mph, and hopefully won’t hold up the traffic.”

David will obviously be hanging onto the Clydesdale for the foreseeable future, and might even be tempted to add to his collection.

“It would be nice to get hold of a Leyland Beaver, or even an old Volvo,” he said: “I don’t particularly want to spend time restoring an old lorry, so it will have to be in good condition. Who knows, when I’m visiting the rally circuit, I might spot something that takes my fancy. It will have to be really special to match my favourite Clydesdale.”